Because of the amount of the tax abatement, the request needed to be approved by the Lebanon school board Monday which allowed county officials to present the request Tuesday to the Warren County Commission which approved an initial 10-year, 50% CRA real property tax abatement. The agreement also provides certain benchmarks based on the project’s valuation, payroll and square footage to be reached that would increase the CRA property tax abatement to 15 years at 75% as the project continues to grow.

The land was rezoned last year and Turtlecreek Twp. officials told Warren County commissioners that the land was one of two economic development corridors the township hopes is developed to help offset the costs of growth otherwise shouldered by its nearly 15,000 residents and other property owners.

The agreement requires the developer to work with Turtlecreek Twp. and the city of Monroe to either develop or expand the current Joint Economic Development District. Monroe City Manager Bill Brock said the JEDD discussions have not been scheduled as of Thursday. 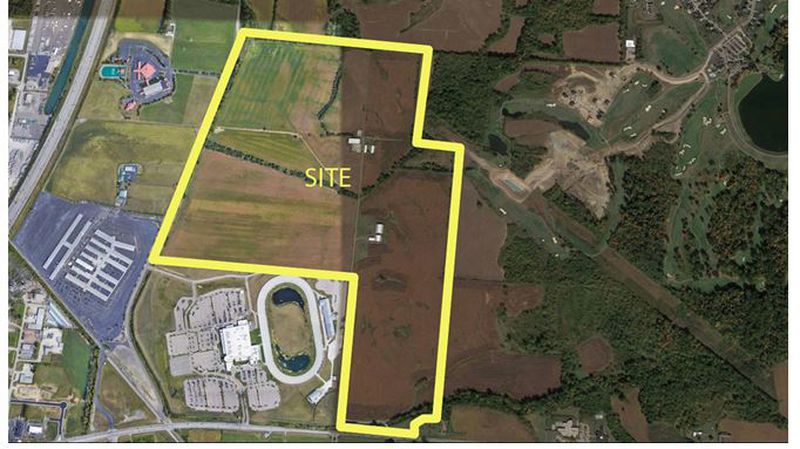 The Lebanon school board and the Warren County Commissioners approved a Community Reinvestment Act tax abatement for a new logistics center. The new center will be on Ohio 63 east of the Miami Valley Gaming racino on former prison farm land. Construction is expected to begin later this summer. CONTRIBUTED

The site is already part of a busy logistics, entertainment and retail corridor off of the Interstate 75/Ohio 63 interchange.

At the time of the purchase, Martin Russell, deputy Warren County administrator and port authority executive director, said the purchase of the unused prison land has been discussed and negotiated for several months. The prison used to farm the 296 acres, but that ended several years ago.

Russell expects the closing on the sale of the property in the next few weeks. He said the port requested an additional month of due diligence which extended the closing until June.

“What this means is that we’ve demonstrated the demand and desire for business growth along the Interstate 75 corridor,” Russell said. “This is a prime area and we’re using the state investment of the new interchange that is paying off for all of our partners through new development.”

He said Doug Armbruster of Core 5 had previously worked with IDI in the development of the successful and fully developed 429-acre Park North, which is on the south side of Ohio 63 from the racino. Park North is the home of massive distribution centers such as Amazon, Walmart and Home Depot.

Russell said the project is beneficial to the Lebanon school district because it gives them the ability to broaden its tax base immediately with an additional $10 million valuation when the sale is closed and without any increase in student enrollment.