UN Human Rights Day puts the global spotlight on the importance of human rights in the post-COVID recovery. IMO is highlighting the plight of the hundreds of thousands of seafarers who are still stranded at sea and has issued a strong call for their fundamental rights to be respected.

It is estimated that 400,000 seafarers are currently stranded on ships beyond the end of their original contracts and unable to be repatriated, due to COVID-related travel restrictions. Some have now been working at sea for over 18 months, well beyond the 11-month limit set out in ILO’s Maritime Labour Convention (MLC). A similar number of seafarers are stuck at home, unable to join ships and provide for their families.

In a statement issued on Human Rights Day (10 December), IMO Secretary-General Kitack Lim invited everyone in the logistics and supply chains to stand up for human rights across the maritime sector. “Sadly, we have seen human rights of seafarers, fishers and other marine workers put in jeopardy during the pandemic,” Mr Lim said. “This is a clear human rights issue. This is causing immense strain, fatigue and exhaustion and is unsustainable.” 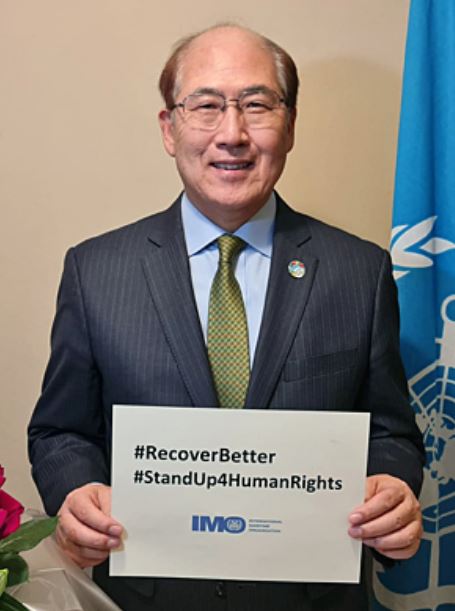 ​​​In a statement issued on Human Rights Day (10 December), IMO Secretary-General Kitack Lim invited everyone in the logistics and supply chains to stand up for human rights across the maritime sector.

People in the maritime sector have been on the frontline during the pandemic, delivering food, medicines and essential goods across the globe. However, seafarers cannot stay at sea indefinitely. The Secretary-General warned that failure to protect the rights of seafarers, fishers and other marine personnel will jeopardise the safety of shipping and have a detrimental effect on global supply chains. (Read the full message below.)

To help increase awareness of the issue, IMO has launched a video featuring seafarers who describe the challenges they have faced due to the pandemic, and the impacts of the resulting crew change crisis on their physical and mental health.

Among them, British Chief Engineer Matt Forster saw his original 10-week contract extended and ended up spending six months at sea. “The biggest psychological effect was that you couldn’t see an end to it. None of us signed up for that. We want to go to work, do our job, and then come home. We didn’t sign up for what felt like an unjustified prison sentence,” he said.

American Captain Hedi Marzougui said that the extended period on board had a significant impact sea on his crew and himself. “The longer you stay out there, the more fatigued you get physically. The hours start to add up, the weeks and months start to add up. And you get very tired and you are not as sharp as you are when you are doing your normal stint,” he said, adding that fatigue and exhaustion can lead to accidents.

Captain Marzougui called on the world to help his fellow seafarers still stranded at sea. “We also have rights as human beings, we have a family of our own. We have a life to get back to. We’re not robots, we shouldn’t be seen as second-class citizens,” he said.

Among the seafarers who were unable to join ships due to travel restrictions, Indian Second Officer Pankaj Gautham experienced significant difficulties feeding his family. “It was financially a crisis for me, and it was a difficult time”, he said.