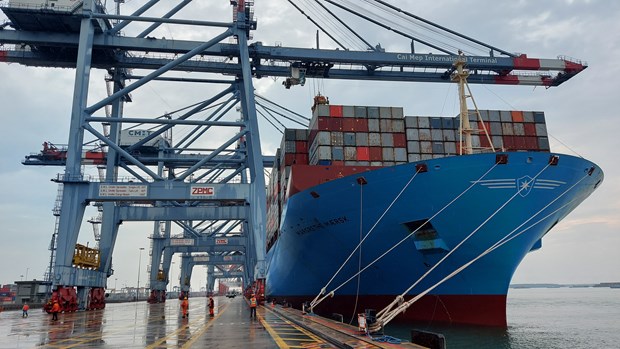 The 214,121-DWT vessel, operated by the 2M
Alliance led by Maersk Line and Mediterranean Shipping Company, is able to
carry over 18,300 twenty-foot equivalent units and stretches nearly 400m in
length and 59m in width.

With the ship’s call, CMIT became one of about
20 major ports worldwide capable of handling vessels of this size, establishing
its position on the global navigation map.

The terminal’s capacity to receive ships of over
214,000 DWT was said to be significant as Vietnam has signed several free trade
deals such as the EU-Vietnam Free Trade Agreement (EVFTA) and the Comprehensive
and Progressive Agreement for Trans-Pacific Partnership (CPTPP), hoped to fuel
trading activities.

Vietnam’s goods can be directly loaded onto big
vessels and shipped to many large markets like Europe and the US without having
to transit ports in Singapore or Malaysia, thus saving logistics costs and
reducing transport time./.