Saudi Arabia’s strategic geographic location at the intersection of Europe, Asia, and Africa positions itself to become a leading global logistics hub by promoting the ease of movement of people and goods across the Kingdom. Enhancing the financial sustainability of logistics development in part through attracting the private sector is a key objective of the National Industrial Development and Logistics Program (NIDLP). NIDLP aims to create 1.6 million jobs and attract investments worth SAR1.6 trillion ($427 billion) over the next decade. Of that total, SAR135 billion ($36 billion) is earmarked for a mix of government and private spending across a range of logistics development projects.

There is significant scope for private sector participation in the development of ports, airports, rail, and road infrastructure projects. Additional opportunities include the construction of new facilities including cargo terminals, customs bonded zones, industrial clusters, new shipping lanes, and expanded airport and seaport capacity. Furthermore, a cross-cutting digitization agenda has driven state-led and private sector logistics innovation in the areas of licensing, registration, passenger and cargo flow, import and export financing, and internet of things (IoT) technology that have boosted the sector’s operational efficiency. 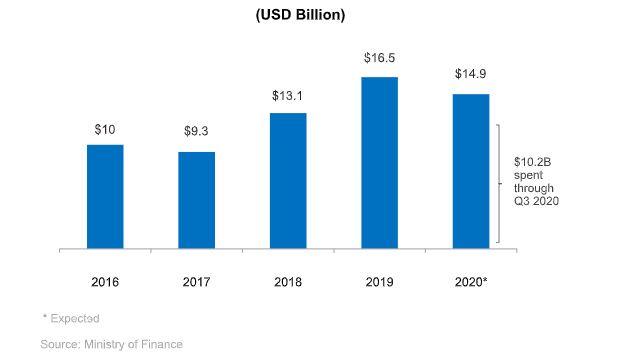 ‘Transportation, storage, & communications’, a sector that broadly encompasses logistics, warehousing, and cargo transportation activity has grown from SAR129 billion ($34 billion) in 2013 to SAR164 billion ($44 billion) in 2019, increasing its GDP contribution from 5.5 percent to 6.2 percent. The sector grew 4.2 percent YoY in the first quarter of 2020 before the impact of COVID-19, but declined 16.3 percent YoY in the second quarter, among the hardest hit by lockdowns that led to slowdowns in international trade and domestic travel.

However, there is early evidence of a bounce-back in the logistics sector as imports remain high and the value of non-oil exports has returned to pre-COVID levels in the third quarter. Jeddah Islamic Port (JIP), which handles the majority of cargo imported through Saudi ports, witnessed an 11 percent YoY increase in total throughput year-to-date in October 2020. The number of containers (TEUs) handled at JIP year-todate increased 5.5 percent from 3.7 million to 3.9 million TEUs over the same period. However, Saudi Arabia’s industrial ports are still recovering from the negative impact to oil and downstream petroleum trade. Jubail Industrial Port’s year-to-date throughput by the end of October is down 5.5 percent while 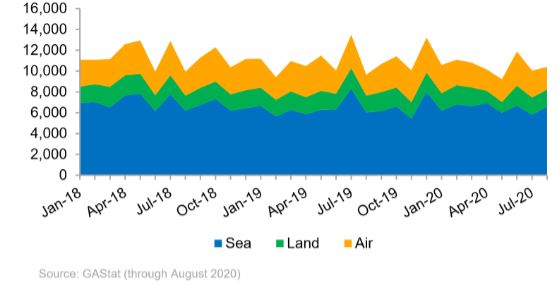