The IMO’s MARPOL Annex IV is being revised to confirm the lifetime performance of Sewage Treatment Plants (STPs). This may finally bring about grey water regulation – a necessity that is long overdue.

A ship’s sewage (black water) is collected from toilets, urinals and hospitals. The IMO’s MARPOL Annex IV prohibits its discharge, except when treated by an STP or discharged at > 12nm from the nearest land. A ship’s grey water, collected from showers, wash basins, laundries, and galleys, is not regulated.

Grey water has more pollutants (measured as BOD or COD) and hence greater environmental impact than black water (Table 1) [1-4]. But logical attempts to regulate grey water have been to no avail [5].

It has been widely acknowledged that the vast majority of approved STPs are discharging ‘virtually untreated sewage’ [6], and the regulation need to be made effective. What may not have been recognized is that, for good technical reasons, an effective black water regulation may not be readily achieved without regulating grey water.

For decades, marine regulators have assumed that a ship’s sewage is similar to sewage on land. It cannot be more wrong.

A ship’s sewage is far more concentrated, since urban wastewater contains groundwater infiltration, rainwater, and grey water. Onboard vacuum collection systems push the concentrations even higher, making ship sewage the most concentrated across all industries (Table 2) [1].Yet, ship sewage is subject to more stringent Faecal Coliform limit when compared to the discharge standards around the world, including the EU land-based rules (Table 3).

It is more so when it comes to the challenging nutrient standards. Under the Baltic Sea Action Plan [7], local communities of up to 300 population equivalent (p.e.) are not required to remove Total Phosphorus (TP). Conventional biological wastewater treatment plant (WWTP) on land can achieve the Total Nitrogen (TN) target of 35 mg/l or 30% without introducing nitrogen removal technologies. As such, local communities of up to 10,000 p.e. are not required to remove Total Nitrogen (TN) (Table 4).This is not because that the land-based industries are not ambitious, or that local communities don’t care. It is quite the opposite.

They have evidence based, practicable, and sustainable environmental regulations that are enforced by performance monitoring (Figure below), whereby the goal is to protect environment, using best available technologies without entailing excess costs or adverse environmental impact.  In contrast, passenger ships carrying as few as 12 passengers are given nutrient standards that are considered unnecessary, unbeneficial, and unviable by industries on land (Table 4). 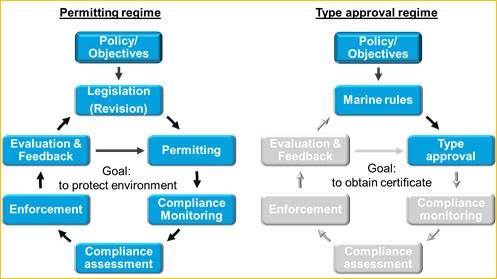 But are these sewage nutrient standards practicable?

A ship’s black water can have nutrient concentrations 10 times that of urban wastewater (Table 5). There are other challenges. Ship operators can never be as familiarized with, or dedicated to, an STP as full-time operators in WWTPs. Ships have far less space and far poorer access and have real challenges in logistics and services. Plus, ships pitch and roll.

No one complained. The IMO’s type approval regime has made impossible tasks so ‘easy’ (Figure above). Ship owners who won’t trust a Bunker Delivery Note have embraced the certification of environmental technologies. Even those ships not applicable for nutrient removal have joined in, oblivious of the implications. It may not be a surprise that the first historical and courageous withdrawal of a certification under the MARPOL Convention was to an STP type approved for nutrient removal [8].