The Palestinian Authority on Friday evening dramatically announced that it was canceling a deal in which Israel would supply it with some 1 million Pfizer vaccine doses to help with its floundering coronavirus vaccination campaign.

The PA said the doses, which Israel began shipping to the West Bank on Friday, are too close to expiring.

“The competent teams in the ministry found that the vaccines we received today from Israel did not meet the specifications, so the government decided to return them,” said PA Health Minister Mai al-Kaila.

PA government spokesman Ibrahim Milhim said that Prime Minister Mohammad Shtayyeh has ordered the cancelation of the agreement and the return of the vaccines to Israel. He said the Palestinians would not accept “about-to-expire” vaccines from Israel.

PA officials had come under heavy criticism on social media after the agreement was announced earlier Friday, with Palestinians accusing them of accepting subpar vaccines and suggesting they might not be effective.

There was no immediate official Israeli reaction to the cancellation, but Army Radio quoted a Health Ministry official as expressing incredulity.

“We don’t know what they want, the vaccines are fine,” the official said. 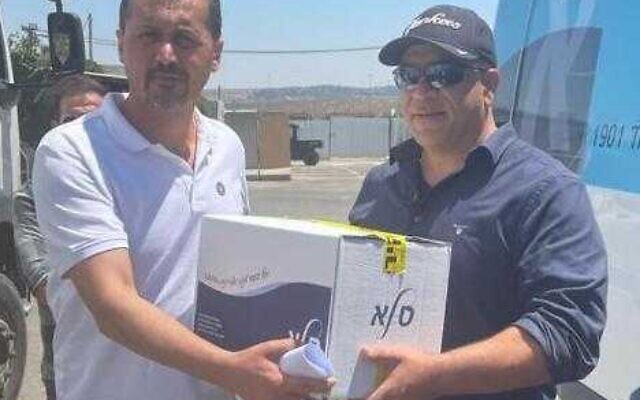 Israel begins the transfer of some 1 million vaccines to the Palestinian Authority on Friday June 18, 2021 (COGAT)

In announcing the agreement, Israel said the vaccines “will expire soon” without specifying the date.

Earlier Friday,  Prime Minister Naftali Bennett’s office said it would transfer doses for the Palestinians immediate use, and that in exchange, in September and October, Israel would receive shipments of Pfizer vaccines that were originally meant to go to the Palestinians.

“The plan was approved based on the fact that Israel’s current vaccine stockpile is sufficient for its current needs,” the PMO statement said.

A statement from the Health Ministry said Israel would deliver between one million and 1.4 million doses and would receive an identical number of doses in return.

A first batch of some 100,000 doses was transferred to the Palestinians on Friday.

The Israeli military’s Coordinator of Government Activities in the Territories, which administers Palestinian civilian affairs, said it had been working for several weeks to sign a deal with the Palestinian Authority.

Hand to hand: A first delivery of 100,000 Pfizer vaccines was transferred today by Israel to the Palestinian Authority. Over 1 million vaccines are scheduled to be transferred.

“The coronavirus does not recognize borders or differences between peoples,” Horowitz tweeted. “This important move to swap vaccines is in all of our interests. I hope this move will lead to further cooperation between Israel and our Palestinian neighbors in other fields.”

Palestinians portrayed the agreement differently, saying Pfizer had suggested the transfer as a way of speeding up its delivery of 4 million doses that the PA had already paid for in an agreement reached directly with the drug company.

“This is not an agreement with Israel, but with the Pfizer company,” al-Kaila said earlier Friday, before the deal was called off, according to the official Wafa news agency.

Al-Kaila said that during three-way negotiations between the PA, Israel and Pfizer, Israel demanded that none of the vaccines be transferred to the Hamas-run Gaza Strip and that the contract not be signed by the State of Palestine.

She said the Palestinians refused both demands.

Cainiao partners with Hainan government to help it become a “smart supply ...