SHANGHAI, CHINA – Media OutReach – 13 May 2021 – In the first half of 2020, China was the only country among UK’s top five trading partners to achieve positive growth in bilateral goods trade, mainly due to a 17.2% increase in goods imported by the UK from China. To cater to the growth in UK-China trade, DHL Global Forwarding has launched a new rail-sea freight solution that will link businesses in China with customers in the UK, and vice versa, in 18 to 20 days. Compared to ocean freight that would typically take 40 days, the new service cuts transit time by more than half. 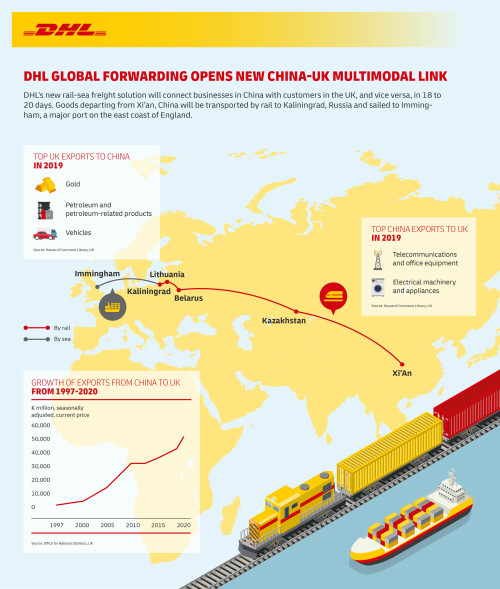 Since the start of the pandemic, rail has emerged as a popular alternative for shippers who balk at hefty air freight rates as a result of capacity shortage, and eschew long ocean freight transit time due to equipment and capacity shortages. Globally, the rail freight market is expected to see a compounded annual growth rate of 9.9% in 2021.

“The UK faced numerous trade challenges in the past year, having to navigate economic and trade uncertainties over Brexit and during the pandemic, whilst managing new UK-EU border regulations and processes at the dawn of the new Brexit era. As the UK economy starts picking up and China celebrates record growth in Q1 2021, trade between the two partners would be one to watch,” said Kelvin Leung, CEO, DHL Global Forwarding Asia Pacific.

According to the DHL Global Connectedness Index 2020, China was ranked second by its share of the UK’s international flows. In the first eight months of 2020, British exports to China rose by 10.7%, or £837 million (€982 million), even as the UK saw its overall exports fall by 25% for the same period. In 2019, the most sought after British goods in China were gold, petroleum and petroleum-related products, and vehicles, while telecommunications and office equipment, and electrical machinery and appliances were key Chinese exports that made their way to the UK.

Consolidating goods from across China at DHL’s hub at Xi’an, China, the new service will transport the cargo by rail to Kaliningrad, Russia via Kazakhstan, Russia, Belarus, and Lithuania, and then transferred to Immingham by sea, where the UK import customs and final delivery of the cargo to the consignees are processed. The service is jointly developed by DHL Global Forwarding China, Xi’an International Inland Port Investment & Development Group Co. Ltd, RZD Logistics and RTSB Gmbh.

Steve Huang, CEO of DHL Global Forwarding Greater China, said, “Most China-UK multimodal routes often include Germany, Poland or the Netherlands as the midpoint for transfer from rail freight to sea or road freight. After Brexit, going by these routes would incur additional customs procedures and fees. The new service will potentially avoid seasonal congestion on the EU border, which in turn guarantees a more stable transit time.”

Ukraine’s exports to China surged 63.3% year on year in 2019, as Sino-Ukrainian trade turnover hit a massive US$12.8 billion (€10.7 billion). Find out how DHL is supporting this growing trade partnership by establishing better rail…