NEW DELHI — The international community is scrambling to provide assistance to India, which is being ravaged by new coronavirus variants. But in leapfrogging one another to announce shipments of oxygen, medical supplies and other emergency aid, the U.S., European nations and dozens of other countries appear to be making certain diplomatic calculations.

India, which occupies a key position in terms of Indo-Pacific security, is in dire need of oxygen and drugs, Foreign Secretary Harsh Vardhan Shringla said Thursday during a news conference.

Shringla also said the country has received offers of support from over 40 nations.

India, which now leads the world in new cases, also counted more than 3,500 deaths on Saturday.

As the totals climb, hospitals are running out of beds and oxygen, and the medical system is verging on collapse.

The U.S. said it will provide $100 million worth of medical products to India. The products include 1,100 oxygen cylinders, 20,000 doses of the antiviral drug remdesivir and raw materials from which 20 million doses of coronavirus vaccine can be produced.

From Europe, Germany has expressed an intention to supply artificial respirators and medical masks, France plans to provide liquid oxygen and the U.K. intends to offer oxygen concentrators, according to Indian news outlets.

Japan on Friday began procedures to supply India with artificial respirators and oxygen concentrators, which inhale air and exhale oxygen.

While India runs out of oxygen to treat coronavirus patients, its vaccine stores are also dangerously low — despite the fact that the country boasts the world’s largest capacity to produce vaccines.

Production, however, cannot keep up with soaring demand from frightened citizens rushing to be inoculated.

The Indian government planned to start vaccinating people above the age of 18 on Saturday, but cities are already short on doses. 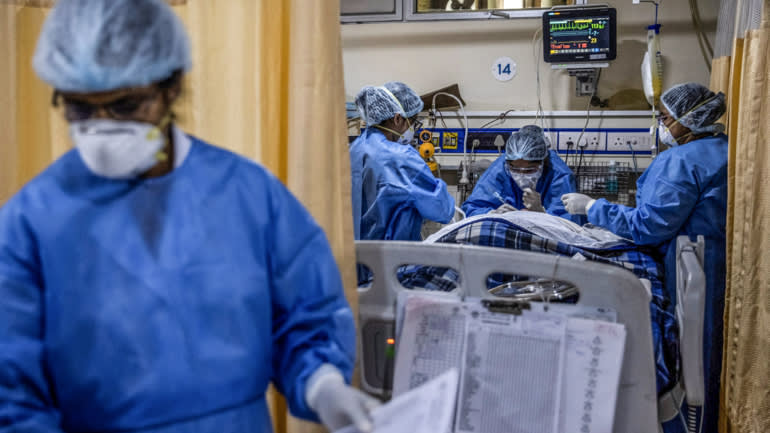 Medical workers tend to a COVID-19 patient inside the ICU ward at Holy Family Hospital in New Delhi on April 29.

Offers of aid from some countries appear to be tinged with diplomatic motives.

India in mid-April approved the use of the Russian-made Sputnik V vaccine. During the phone call, Modi and Putin confirmed that India will soon start producing Sputnik V. They also agreed to establish a 2+2 ministerial dialogue between foreign and defense ministers.

By deepening cooperative relations with India, Russia appears to be positioning itself as a wedge between India and its Quad partners — the U.S., Japan and Australia.

Quad is shorthand for the Quadrilateral Security Dialogue.

China is also upping its diplomatic game in South Asia. Wang Yi, China’s state councilor and foreign minister, on Tuesday held a video conference with his counterparts from Afghanistan, Pakistan, Nepal, Sri Lanka and Bangladesh, ostensibly to discuss coronavirus countermeasures. China had invited India to the meeting, but India’s foreign minister did not log on.

During the conference, Wang reportedly offered to provide the South Asian nations with vaccine supplies and post-pandemic economic assistance. He also noted that China will push ahead with its “One Belt, One Road” initiative.

Furthermore, he noted that China will help and cooperate with India as the need arises. India and China are involved in a long-simmering border dispute that flared into hostilities last June, and India remains wary of China’s “vaccine diplomacy” toward its neighbors.

In mid-March, the four Quad leaders outlined a plan to supply the world with about 1 billion…

Read More: Countries step up to supply oxygen and medicine to India