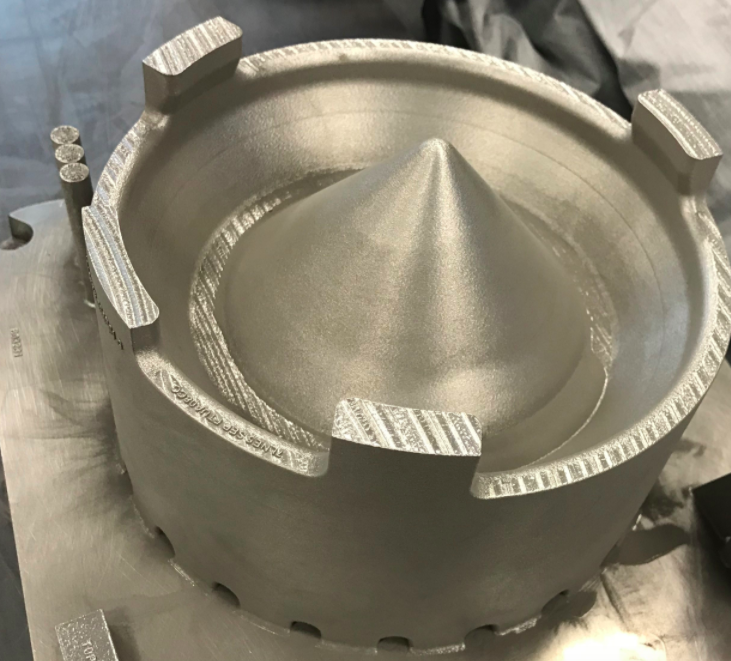 The next step in the program will see a metal parts additive manufacturing supply chain established at Tinker AFB in Oklahoma, starting with a buy of two GE printers in fiscal 2022.

“We will be taking delivery of two GE Additive machines during the first quarter of FY22 and have them fully operational during the second quarter of FY22,” according to an email response to Breaking D’s questions from the Air Force’s Pacer Edge team at Tinker yesterday. “The program is committed to pushing the bounds of this game changing technology to improve warfighter capabilities and tackle material readiness challenges.”

“The Pacer Edge program is an important initiative for reducing risk and showcasing the application of additive manufacturing in aerospace. The ability to additively manufacture an aircraft engine part and gain military airworthiness is a significant step forward in growing the adoption of additive manufacturing in the Air Force,” said Nathan Parker, deputy program executive officer at RSO, in a GE press release.

“The F110 sump cover was a terrific pathfinder, allowing us to exercise the USAF’s airworthiness process. There are numerous parts in queue that are ideal candidates for metal 3D printing. Next, we are focused on refining the airworthiness process, so it is as responsive as the technology,” added Melanie Jonason, chief engineer, at the service’s Propulsion Sustainment Division.

While the “Configuration Control Board (CCB) and Airworthiness” approval was inked on Feb. 23 for the additively manufactured F110 Sump Cover, according to the Tinker team’s email, it wasn’t announced until June 8.

The program was launched with a $1.1 million contract to GE in March 2020. A second contract for $2.6 million was awarded in September 2020, kicking off 3D printing of a family of parts on the TF34 engine, which has been in service for more than 40 years. A third contract for $5 million was awarded this April, and another $5 million contract will be inked later this month, the email added, bringing the total awards (funded by both RSO and the Propulsion Directorate) so far up to $13.76 million.

While the F110 sump cover is a small part, it is nonetheless important to how the engine — used by both the F-15 and F-16 fighter jets — functions. Its air worthiness certification moves the Air Force closer to its goal of expanding the use of 3D printing to boost aircraft readiness. Air Force leaders see additive manufacturing as key to resolving the service’s serious problems in maintaining aging aircraft and infrastructure and lowering costs.

Putting GE’s 3D printers at Tinker also will advance AFLMC’s push to establish its own additive manufacturing capabilities at its depots, so the service can print its own spare parts. The Oklahoma City Air Logistics Complex at Tinker printed its first metal engine part — for the TF33-P103 engine — last August, and the acquisition will expand its capacity.